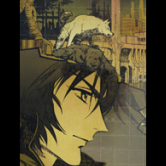 By Lupus Hirpus,
August 27 in Suggestions